You are using an outdated browser. Please upgrade your browser to improve your experience.
by A.T. Faust III
January 23, 2012
The tablet market is booming. This news, supported by the latest industry analysis from the Pew Internet & American Life Project, comes just after a holiday season in which major players Apple and Amazon both saw record-breaking Christmas sales. Between mid-December and mid-January, tablet/e-reader ownership jumped from 10 percent to 19 percent, nearly doubling the number of Americans who own one or more such device. However, while I agree that the tablet/e-reader adoption is up across the board (That's a no-brainer.), it's extremely difficult to wrap my mind around these particular Pew assertions. As of late 2011, there were something like 50 million iPads in the wild. Of course, since Apple didn't sell 50 million iPads in the last month (and is only expected to move 13-15 million units this quarter), Pew's data suggests that Apple's opponents are outselling iPad. And, though that's reasonable when totaling up and including base e-readers to the competition, it's utter folly to compare the two types of tech. Apples and oranges, right? Either way, the Pew data seems sketchy. Obviously, tablet/e-reader ownership is up. (Duh.) But it hasn't doubled over the holidays. (Double duh.) Look, Amazon sold only about four million Kindle devices during that time period, and -- even tossing early January purchases into the mix -- the retail giant can't be close to having increased its marketshare twofold. The numbers just don't add up. Maybe Pew counts iPods and iPhones as tablets, too? That would explain things a bit better, but my guess is that -- as usual -- the polling methods were flawed. Naturally, the analyst firm's "Methodology section" links to a fitting 404. Seriously, who even uses a landline anymore? 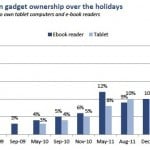