You are using an outdated browser. Please upgrade your browser to improve your experience.
by Joe White
February 11, 2012
This week, Apple has sent its lawyers after both Motorola and Samsung. According to reports from Reuters and paidContent, Apple is suing Motorola for the company's use of Qualcomm technology, while Samsung is being targeted because of its autocorrect feature (among other iOS patents). First, lets talk about Motorola. The news of Apple's lawsuit against the company hit the Web via Reuters yesterday, who noted that:

Apple sued Motorola Mobility in a U.S. court on Friday over a patent license agreement between Motorola and Qualcomm, according to a copy of the lawsuit.

After digging up the lawsuit, 9to5Mac elaborates, explaining that Apple "is suing Motorola over their claims that Apple is illegally using Qualcomm’s baseband chip" - referring to another lawsuit Motorola filed at the beginning of the month, which saw Apple temporarily remove its 3G-capable iOS devices (apart from the iPhone 4S) from its German Online Store. In the website's article, 9to5Mac explains that:

In its lawsuit, Apple asks the court to ban Motorola from being able to sue Apple over Apple’s use of Qualcomm’s technology.

Regarding Samsung, paidContent notes that two patents Apple obtained in December are being used as the foundation of its lawsuit: the first deals with the autocorrect feature present in both Apple's and Samsung's smart phones; the second, admittedly, is not so clear. Here's what the second patent says:

Apple claims that Samsung's Galaxy Tab blatantly rips-off the iPad; back in December, Apple looked to obtain a primary injunction which would have banned the sale of Samsung's tablet. However, this was denied. As always, we'll let you know if this story develops - so check back with us. 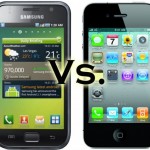 Apple Sues Motorola Over Qualcomm Patent, Samsung For Its Use Of Autocorrect

Apple Sues Motorola Over Qualcomm Patent, Samsung For Its Use Of Autocorrect
Nothing found :(
Try something else