You are using an outdated browser. Please upgrade your browser to improve your experience.
by Joe White
February 8, 2012
Apple has announced that it is planning to stream Paul McCartney's intimate February 9 concert to Macs and PCs via iTunes, and also to Apple TVs - potentially signalling renewed attempts to utilize the company's set-top box, as MacRumors notes. An announcement for the live stream can be viewed in the iTunes Store, with Apple noting:

To celebrate the release of Paul McCartney's latest album — available now — we're streaming his exclusive performance at Capitol Studios on February 9 at 7 p.m. (PST). Watch the concert on iTunes on your computer, or stream it on your TV using your Apple TV — just choose iTunes Live from the Internet menu.

This will be a new experience for Apple TV owners, as previous live streams could only be AirPlayed from an iOS device to the set-top box (as with the past years' iTunes Live festivals). Perhaps Apple is attempting to further push the versatility of its Apple TV ahead of the launch of a full Apple-branded HDTV, as has been rumored. Either way, if you're a fan of Paul McCartney, you can view his concert on a Mac, PC or Apple TV tomorrow at seven p.m. PST. 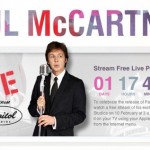 Apple To Stream Paul McCartney Concert To iTunes, Apple TV
Nothing found :(
Try something else