You are using an outdated browser. Please upgrade your browser to improve your experience.
by Brent Dirks
February 29, 2012
If you were unhappy with the news yesterday that ads will soon be appearing in your timeline if you are using Twitter for iPhone, I’ve got some more bad news for you. Ads will soon be appearing in your Facebook newsfeed on both your PC and iOS device. According to AllThingsD, Facebook’s new mobile ad plan, revealed today, will look a lot like Twitter’s:

Facebook’s big idea, as it laid out in marketing documents that leaked last week, is that marketers should create “content” that will double as an ad. And it will let them distribute that content/ad in between the rest of the stuff in users’ “newsfeed” - both on PCs and on phones.

Facebook, which is preparing for a mega-IPO soon, boasts more than 800 million users worldwide. And, according to the company, more than half of those users access the service on a mobile device, which for many is the company’s well-designed app for the iPhone and iPad. But just like Twitter, Facebook needs to make money, and apparently the logical place for ads is right in the middle of the action – whether that is your newsfeed or timeline. While Twitter is better known for opening up its API to developers, there are less quality outlets for users to turn to for an ad-free Facebook experience when the time comes. Are you surprised by Facebook’s plan? (Image via grownupgeek.com) 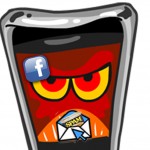 Facebook’s Mobile Ad Strategy Will Mirror Twitter’s
Nothing found :(
Try something else