You are using an outdated browser. Please upgrade your browser to improve your experience.
by Aldrin Calimlim
February 19, 2012
Closely following the so-called confirmation of the Retina display of the iPad 3, Next Media’s Apple Daily (Taiwan) has posted photos of what it claims to be proof of two more technical specifications of the new version of Apple’s popular tablet. One of the photos, which were obtained by the site through “special channels,” shows a perspective view of the back of the iPad 3. The overview shows that the device has virtually the same casing as the iPad 2, but with edges that are more tapered. The tapering is further affirmed by another photo comparing the edges of the new iPad and its two predecessors. A component of the new iPad that is affected by the additional tapering is the rear camera, whose lens looks noticeably larger compared to the one on the iPad 2. This is because, as Apple Daily asserts, the iPad 3’s rear camera has a higher resolution of 8 megapixels. Although I still can’t imagine using an iPad for frequent camera use, this is no doubt a significant enhancement over the iPad 2’s rear camera, which shoots stills at a resolution of less than one megapixel and is mediocre at best. With the notable omission of 4G LTE support, the scoop concludes with a recap of other upgrades that have long been rumored for the iPad 3: a quad-core A6 processor, the aforementioned increase in display resolution and a March 7 announcement alongside the release of iOS 5.1. It also ponders the question of whether the new iteration will indeed be called iPad 3 or just iPad 2S. Frankly, I couldn't care less, because I know I'll be one of the first in line to buy it either way. (via MacRumors) 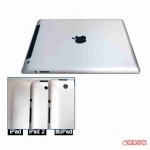 iPad 3 Rumored To Have 8MP Camera And More Tapered Shell

iPad 3 Rumored To Have 8MP Camera And More Tapered Shell
Nothing found :(
Try something else