You are using an outdated browser. Please upgrade your browser to improve your experience.
by Joe White
February 20, 2012
The purported image of an iPad 3's logic board has recently appeared on a Chinese website called WeiPhone. However, instead of showing off the Apple A6 processor we've been hoping would launch with the iPad 3, the tablet's logic board instead houses an "Apple A5X" processor, alongside a couple of 16 gigabyte flash memory chips. Since the Apple A5 succeeded the Apple A4, most Apple fans have been guessing that both the iPhone 5 and iPad 3 would feature an Apple A6 processor. Furthermore, a number of reports have indicated that this processor could be quad-core, as opposed to the dual-core composition of the A5. The above image, if authentic, suggests otherwise. An Apple A5X processor would most likely be similar to the A5 chip we're already using in our iPhone 4S handsets and iPad 2 tablets, with minor changes and improvements. Already, BGR has confirmed that the part number of the iPad 3's processor is S5L8945X. When you compare this with the numbers of the A4 and A5 (S5L8930X and S5L8940X, respectively), we can see from the figures which precede the final "X" that the iPad 3's processor is merely a modified version of the A5. Besides an improved processor, Apple's iPad 3 is expected to launch with a Retina display and support for LTE. The new tablet should be announced in March, if the numerous reports we've seen are correct, with several sources noting that March 7 is a date worth keeping free. If any more iPad 3 news hits the Web, we'll be sure to let you know. In the meantime, feel free to post your thoughts on the above in the comments. [via MacRumors] 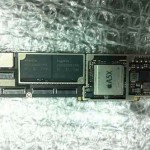 New Image Of iPad 3's Logic Board Shows Apple A5X Processor
Nothing found :(
Try something else