You are using an outdated browser. Please upgrade your browser to improve your experience.
by Brent Dirks
February 24, 2012
In a bid to save space inside devices, Apple is apparently ready to ditch the traditional 30-pin dock connector and transition to a smaller "micro dock," according to iMore. According to the site, the change is for simple reasons:

"We've heard that Apple is getting ready to ditch the dock connector as it's currently sized and implemented on iPods, iPhones, and iPads. The reason isn't anything political, like a new desire to conform to an outdated micro-USB standard, but typically Apple: to save space inside the iPhone 5 for what are now more important components."

This isn't the first time that Apple has made components inside iDevices smaller to save space. The first-generation iPad debuted the micro-SIM card that is now standard among iPads and iPhones. And with the iPhone 4, the antenna was moved from inside the case to around the edge, for better or worse. And even before iOS devices, the company has been on the forefront of making once-ubiquitous technology, like floppy drives and FireWire, obsolete. Some of the reasoning behind the switch, according the site, is how the role of the connector has changed. When the dock connector was first introduced, it was the only way to sync and transfer information. But now Apple has introduced technology like iCloud, Wi-Fi sync and AirPlay, which has made a dock connector less of a must-have. As for when a new micro dock connector would debut, the site's Rene Ritchie said the iPhone 5 would make more sense. Current rumors peg the iPhone 5's launch in the fall, one year after the introduction of the iPhone 4S.

"I'm saying iPhone 5 because we haven't heard a specific timeline. iPad 3 is a much bigger device which may not be facing the physical size constraints of the iPhone yet. iPad did get the micro SIM first, however, so it's possible Apple could be looking to debut a newer, smaller dock connector on that device first. We just haven't heard anything specific about it and so think iPhone 5 is more likely."

Would you be happy if Apple changed the dock connector size, making all of your accessories virtually obsolete? 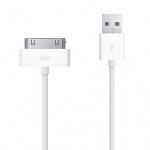 Report: Apple Ready To Move To Smaller Dock Connector
Nothing found :(
Try something else