You are using an outdated browser. Please upgrade your browser to improve your experience.
by Joe White
March 23, 2012
Today, Apple's new iPad is set to launch in 25 additional countries at 8 a.m. local time, and as you might expect, lines have already started forming for release of the third-generation Retina-ready tablet. The second round of the iPad's launch sees Apple's new tablet become available in the following countries: Austria, Belgium, Bulgaria, Czech Republic, Denmark, Finland, Greece, Hungary, Iceland, Ireland, Italy, Liechtenstein, Luxembourg, Macau, Mexico, The Netherlands, New Zealand, Norway, Poland, Portugal, Romania, Slovakia, Slovenia, Spain and Sweden. Federico Viticci (@viticci) of MacStories updated Twitter a few hours ago, noting that there were around 60 people waiting in line outside his local (Italian) Apple Store. Further social network updates note that lines have formed around other international Apple Stores, too. The launch of the third-generation iPad has so far been a success. In just three days, it was announced that Apple saw 3 million iPads sell to customers. AT&T also claimed a record number of iPad activations following the launch of the device. Let us know in the comments if you're getting a new iPad today, and if you're pleased with what you receive! 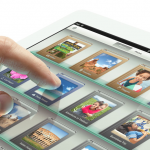 Apple's New iPad Launches Today In 25 Additional Countries
Nothing found :(
Try something else