You are using an outdated browser. Please upgrade your browser to improve your experience.
by Aldrin Calimlim
March 20, 2012
During the recently held conference call discussing Apple's plans for its $100 billion cash balance, Apple CEO Tim Cook alluded to a "record weekend" for the new iPad. Apple today elaborated on that intriguing phrase in a press release that disclosed just how many new iPads were sold in the three days following the product's launch last Friday. And the official figure is nothing if not staggering: three million new iPads sold in just three days. To provide you with some perspective as to the magnitude of this figure, consider that the original iPad generated sales numbers of 300,000 units on its first day and only one million on its first month in 2010. No numbers resulting from the first weekend sales of the iPad 2 were announced by Apple last year, however, owing to the device's relatively short supply. Furthermore, the new iPad's initial sales total is comparable to that of the slightly more cost-effective iPhone 4S last October, which topped four million. Indeed, reaching the three million mark for a product that's not exactly inexpensive in its first three days of availability alone is no easy feat. It's an achievement that most other tablet makers can only dream of unlocking, so to speak. 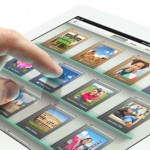 The Rule Of 3: Apple Sells 3 Million 3rd Generation iPads In 3 Days
Nothing found :(
Try something else