You are using an outdated browser. Please upgrade your browser to improve your experience.
by Brent Dirks
March 20, 2012
It looks like someone at the Federal Aviation Administration is actually listening to the iPad-toting public. According to The New York Times, the FAA is planning on taking a “fresh look” at its much-maligned guidelines that forbid the use of personal electronic devices during taxi, takeoff and landing. There has continued to be a public outcry regarding the rules, especially after airlines across the country began replacing paper manuals with iPads for pilots to use during the entire flight. And FAA deputy assistant administrator for public affairs Laura J. Brown said the agency would look into the guidelines, which were last examined in 2006, way before Apple sold millions of iPads in three days:

“With the advent of new and evolving electronic technology, and because the airlines have not conducted the testing necessary to approve the use of new devices, the FAA is taking a fresh look at the use of personal electronic devices, other than cellphones, on aircraft.”

But there is some bad news to go along with the development:

Yikes, that doesn’t sound very promising, as the airlines aren’t exactly rolling in cash and free time these days. Can you imagine how much it would cost in just jet fuel for one test? Add a dash of bureaucracy, and the iPad 9 might be out before fliers could actually benefit. But at least we can hope. Maybe Words with Friends fan Alec Baldwin can help. 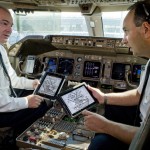 FAA Will Take 'Fresh Look' At Guidelines Regarding Electronics On Planes

FAA Will Take 'Fresh Look' At Guidelines Regarding Electronics On Planes
Nothing found :(
Try something else