You are using an outdated browser. Please upgrade your browser to improve your experience.
by Brent Dirks
March 20, 2012
Even with unprecedented demand, there is some good news for consumers still looking to purchase the new iPad online through Apple’s website. Estimated shipping time for all variants of the new tablet have been updated to to one to two weeks. That’s an improvement on the two to three weeks quoted by Apple since early last week. After being introduced earlier this month, preorders for arrival on launch day sold out in a matter of days. The improved shipping times are good news for consumers and probably a strong sign that Apple will be able to keep up with demand. After launching in 11 countries last week, the new tablet will be introduced in 24 more countries starting Friday. This year strongly contrasts with the rollout for the iPad 2 last year. Apple had issues keeping up with demand, and shipping times were as long as five weeks. Supply was so constrained that Apple never released opening weekend sales numbers. But not this year. Yesterday, the company announced that more than 3 million iPads were sold in the first three days of launch. For comparison, the original iPad sold 300,000 units on opening weekend and took a month to sell 1 million. For those of you close to an Apple Store, that option also seems to be a strong choice to purchase a new iPad. Consumers can order online between 10 p.m. and 4 a.m. local time for in-store pickup the next day. And after looking at the system yesterday, all of the local Apple Stores near my home in Dallas had stock of all models. Have you purchase a new iPad yet, or are you still waiting for yours to ship? 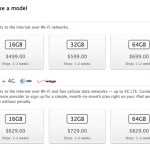 Shipping Time Improves For iPads Ordered From Apple
Nothing found :(
Try something else