You are using an outdated browser. Please upgrade your browser to improve your experience.
by Brent Dirks
March 16, 2012
The Verizon version of the new iPad is looking better each and every day. Along with the ability to use your data plan as a personal hotspot, a poster in the MacRumors forum has shown that the variant will work on AT&T 3G networks with the appropriate micro SIM. The only downside is that a Verizon tablet with an AT&T micro SIM won't work with AT&T's LTE service. It would be limited to EDGE, 3G and HSPA+ (aka 4G for AT&T).

"Big question on everyone's mind buying the Verizon iPad was whether data from AT&Ts 3G network would work on this iPad, or if Verizon/Apple would block this. I was one of the first to obtain a Verizon iPad and can happily confirm that this is allowed! I used my ATT iPhone 4S sim card and took out the Verizon sim, and data worked! You must apply the AT&T APN carrier settings before this works though."

Here's a quick video of a Verizon iPad working on AT&T. Click here if you can't see the video. Both the Verizon and AT&T version of the iPad support the same GSM frequencies. Apple possibly could have restricted use on a different network, but according to the video, it doesn't look like that happened. Has anyone else confirmed that this is possible? For AT&T iPhone 4S owners who ordered a Verizon iPad, like me, this is excellent news. Let us know if your iPad has arrived, or if your early morning standing in line was a success. 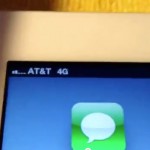 With A Little Work, Verizon iPad Will Work With AT&T 3G Service

With A Little Work, Verizon iPad Will Work With AT&T 3G Service
Nothing found :(
Try something else