You are using an outdated browser. Please upgrade your browser to improve your experience.
by Joe White
April 13, 2012
A couple of days ago, the U.S. Department of Justice filed a lawsuit against Apple and a number of other publishers regarding alleged e-books price-fixing. Now, Apple has commented on the matter, rebutting charges and firing back at both the Department of Justice, and Amazon. The comment, which came from Apple spokesperson Tom Neumayr, was released to All Things Digital, and read:

The DOJ’s accusation of collusion against Apple is simply not true. The launch of the iBookstore in 2010 fostered innovation and competition, breaking Amazon’s monopolistic grip on the publishing industry. Since then customers have benefited from eBooks that are more interactive and engaging. Just as we’ve allowed developers to set prices on the App Store, publishers set prices on the iBookstore.

Immediately after filing the lawsuit, three publishers - HarperCollins, Hachette and Simon & Schuster - settled and signed agreements. Apple obviously did not, and if the above comment is anything to go by, it looks like the Cupertino, CA company is looking for a fight. Indeed, legal experts seem to think the Department of Justice has a weak case, though only time will tell. If any more news hits the Web, we'll let you know. 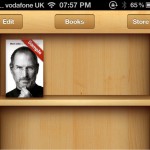