You are using an outdated browser. Please upgrade your browser to improve your experience.
by Aldrin Calimlim
April 12, 2012
Nearly two months after ABC's "Nightline" aired an exclusive report about the Foxconn manufacturing plants in China, Marketplace's Apple Economy has posted a new report about the rather intriguing factory where Apple's top-of-the-line products are assembled. Rob Schmitz, Shanghai Bureau Chief of Marketplace, was recently granted access to look around Foxconn's premises in Shenzhen, and what emerged from his visit was quite a fascinating eye-opener. You can watch an exclusive video below of his inspection of the assembly line responsible for mass-producing iPads as well as of his tour of the Foxconn campus and facilities. You can also read a sobering account of his visit on his Reporter's Notebook feature. If you can't see the video embedded above, please click here. Coming from only the second reporter to visit the factory, Schmitz's story serves to substantiate many outsiders' unflattering views about Foxconn. At the same time, it brings to light reasons why, for most workers, toiling away for China's largest, if most controversial, employer for as little as $14 a day is better than staying at their far-flung villages and earning practically nothing. His behind-the-scenes video, in particular, highlights the factory's so-called appeal to workers, far more than providing a glimpse at some of the interesting steps involved in the production of Apple's bestselling tablet. What's your reaction to this new report? Does it add anything significant to the longstanding conversation about the relative merits, or lack thereof, of Apple's newsworthy subcontractor? 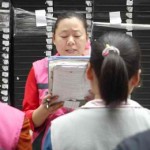 Behind-The-Scenes Video Of Foxconn's Premises Reveals How An iPad Is Made And More
Nothing found :(
Try something else