You are using an outdated browser. Please upgrade your browser to improve your experience.
by Aldrin Calimlim
April 27, 2012
When it was announced last April 1 that Ashton Kutcher would be portraying Steve Jobs in an upcoming indie biopic, many thought it was nothing more than an elaborate April Fools' Day joke. After all, Kutcher is largely known for his comedic roles in Hollywood films and TV sitcoms, and the idea that he'll be playing the role of the late Apple CEO just doesn't fly with many moviegoers. But perhaps the latest bit of casting news that has been making the rounds today will be met more positively: Tony-nominated actor Josh Gad is in talks to portray Apple co-founder Steve Wozniak. The biopic, simply titled "Jobs" and to be directed by Joshua Michael Stern, is scheduled to start shooting next month. "Jobs" will re-enact key events in Jobs' life from 1971 to 2000. Foremost among these events is, of course, the founding of Apple by Jobs and Wozniak in April 1, 1976 (also on April Fools' Day, incidentally). Wozniak, better known as Woz, is noted for providing the engineering foil to Jobs' marketing savvy. Their business partnership paved the way for some of the most successful products in the history of consumer electronics, but it's one that was less than stable. Wozniak has said that he and Jobs were not close friends, even as they remained on good terms until Jobs' death last year. Gad, who played supporting roles in "21" and "Love and Other Drugs," was nominated last year for his leading role in the Broadway musical "The Book of Mormon." His physical resemblance to the pudgy Woz is welcome, but his ability to fully characterize the Apple co-founder on screen is a more important consideration. With luck, perhaps he can even bring out Kutcher's untapped dramatic acting skill, if any. 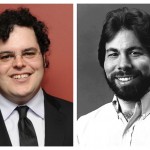 Broadway Star To Portray Steve Wozniak In Steve Jobs Biopic
Nothing found :(
Try something else