You are using an outdated browser. Please upgrade your browser to improve your experience.
by Casey Tschida
April 2, 2012
Despite the four-star rating, Facebook for iOS hasn't been an app that marvels. Finally becoming a portal you can rely on for regularly interacting with the social network, the migration and addition of features has almost always been painfully slow. Today, the official Facebook app finally features offline chat status, iPad Retina display support, expanded localization, and a few big bug removals. While another very delayed feature migration, the option to show offline for chat availability is surely an option many consider "better late than never." To toggle online and offline chat status, tap on the settings icon in the top-right of the chat friends list, and then choose Go Offline or Go Online, depending on the current status. As a reminder, the chat sidebar is only displayed on the iPad when the device is in landscape orientation. Speaking of the iPad, Facebook v4.1.1 includes visual optimizations for the third generation of Apple's tablet. Even though Facebook is behind numerous other developers, both big and small, Retina support for iPad has to be one of the quickest feature additions to the app to date. However, iPad users won't be entirely excited about the update. As Cult of Mac points out, the Timeline layout is still not present on the bigger screen user interface. Again, it's not the first time features have been slowly and inconsistently implemented, although, it does seem quite strange that Timeline shows up on the iPhone and iPod touch, where a more minimal UI is preferred, and not on the iPad. Beyond the new features, today's update takes care of some obnoxious glitches.   There is just one more item I'd like to address. After hearing about the Facebook app update from my AppAdvice colleagues, I went into investigation mode. Initially, I was baffled at the change log when I couldn't find these supposed new features. To my astonishment, I wasn't using the latest version because the Updates section in the App Store never showed a newer Facebook version existed. If the same situation happens to you, here's how to apply the Facebook v4.1.1 update. Search for Facebook, as if you were going to download it for the first time, and then tap the Update button. You can verify the version installed by going to the iOS Settings app, then tap on Facebook under the Apps list. Facebook is a universal app compatible with iPad, iPhone, iPod touch running iOS 4.0 or later, and available in the App Store as a free download. 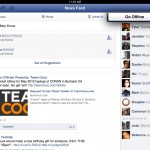