You are using an outdated browser. Please upgrade your browser to improve your experience.
by Brent Dirks
May 8, 2012
Users who logged onto Apple’s iCloud.com website this morning were greeted by an interesting notification box. As pictured, the (obviously mistaken) notification states “Default Title for English” followed on the next line with “English – This a test message description.” The notification could be closed with an “X” on the right edge of the box. The notification also did not link anywhere. While iOS users have been enjoying built-in notifications since iOS 5 was released last fall, it looks like Apple is moving the feature over to its other products as well. Notifications will be a large part of the newest OS X, version 10.8. Apple is planning to release Mountain Lion this summer with a number of features borrowed from iOS, including a Notification Center and Game Center. And while the Game Center feature will allow iPhone/iPod touch vs. iPad vs. Mac cross-platform compatibility, hopefully the iCloud website test is hinting at a converged notification feature between iOS devices, Mac OS X, and iCloud website users. I think it would be great to have a cross-notification feature with all my Apple devices. Instead of having to look down at my iPhone for a calendar notification, it would automatically appear on my iMac running Mountain Lion. The iCloud.com notification could appear for Windows users or Mac users without the latest OS X installed. While there has been little to no information released about iOS 6, the new version is expected to have some type of preview at WWDC in early June in San Francisco with a formal introduction this fall around the time of the new iPhone release. (Via MacRumors) 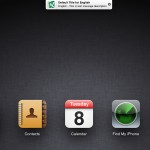