You are using an outdated browser. Please upgrade your browser to improve your experience.
by Brent Dirks
May 17, 2012
Apple is planning on powering its huge North Carolina data center entirely from renewable energy by the end of this year, according to Reuters. Apple announced today that it is building two solar arrays around its (pictured) Maiden, N.C. data center that will supply around 84 million Kwh of electricity yearly. The sites will use high-efficiency solar cells and an advanced solar tracking system. The companies supplying the equipment were not named. Apple said it also will build a smaller, bio-gas fuel cell plant at the installation sometime this year. The data center went live in mid-2011 and currently supports services like iCloud, which is used by more than 100 million users on the iPhone, iPad, and Mac. Even before today's announcement, Apple had been lauded for using green technology at the site. According to Apple, the center has previously earned the coveted LEED Platinum certification from the U.S. Green Building Council and already uses the largest end-user owned solar array in the country. But, that wasn't enough for environmental groups like Greenpeace. Last month, the group heavily criticized Apple for using "dirty" energy from coal and nuclear sources to help power the data center. Even though I think Greenpeace was (once again) over the line, I am glad to see that Apple is completely making the move to renewable energy sources, and halting all possible criticism in the process. Source: Reuters 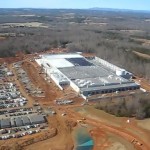 Apple’s North Carolina Data Center Will Be Totally Green By The End Of 2012
Nothing found :(
Try something else