You are using an outdated browser. Please upgrade your browser to improve your experience.
by Joe White
May 4, 2012
Back in March, minutes before Apple was set to announce its new iPad, a huge rumor hit the Web regarding the upcoming product. A number of different sources claimed the Cupertino, CA company was planning on integrating haptic feedback technology within its third-generation iPad's touch screen, adding further meaning to the Apple's invitation-line, "We have something you really have to see. And touch." However, the rumor - clearly - never materialized: our new iPads have stunning Retina displays, but an iOS device that utilizes haptic feedback technology, it would seem, isn't something Apple has been thinking about. Or is it? In a recently published article, 9to5Mac draws our attention to a new patent acquisition (highlighted by the folks over at Patently Apple), which would appear to suggest that haptic technology is indeed going to make its way into our beloved iPhones and iPads, and perhaps even in a form rather unlike that which we had previously hypothesized. Here's how Patently Apple explains the "surprise" of Apple's new patent:

[T]oday's surprise invention packs a punch with a wildly intelligent multi-tiered haptics system. The system will actually allow an iDevice display to deform so that it could provide the user with a button, an arrow or even a geological map to physically pop right out of the screen to give it 3D depth. If that wasn't cool enough, Apple's patent discusses a flexible OLED display that could be used for video glasses.

Sounds impressive, right? If this patent materializes, our iOS devices will be equipped with something that, currently, is unparalleled. If Apple has been looking for a way to best its own industry leading Retina display, it looks like this patent indeed points towards the RD's successor. You can read all about Apple's multi-tiered haptics system in Patently Apple's original article, which explains every detail of the patent in depth. And we'll be sure to let you know if any more news regarding this exciting, new technology hits the Web. 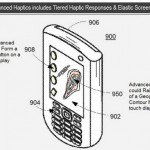 Could Impressive Haptics Touch Screen Launch With Future iOS Devices?
Nothing found :(
Try something else