You are using an outdated browser. Please upgrade your browser to improve your experience.
by Brent Dirks
May 1, 2012
Less than a month after being released, iPhone productivity app Drafts received a sizeable update today. Version 1.1  from developer Agile Tortoise features a number of changes and additions to the idea-sharing app. Drafts is designed to let users capture their thoughts. When launched, users are greeted with a blank screen to compose the draft. Once complete, numerous actions can be taken with the idea – including posting on Twitter, copying to the clipboard, or emailing the text. The app was released in early April. In our original review of Drafts, Christine Chan praised the interface and said that the app was one her new favorites. Most noticeably in the new version, the icon has been redesigned and the app's default theme has been set to the minimalist Grayscale, which is a change from the original brown theme that greeted users in version 1.0. A set of new actions has also been added. Along with exporting a draft to Dropbox, users now have SMS, Sparrow, and Simplenote options. Other fixes and changes include improved display of draft items in a list when swiping to delete. A right or left swipe now also deletes a draft. The new version also features speed improvements providing feedback on actions, most notably with Twitter. Drafts is iPhone-only and $0.99 in the App Store. 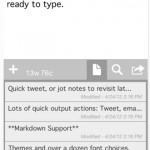 Drafts Receives Sizeable Update With New Features
Nothing found :(
Try something else