You are using an outdated browser. Please upgrade your browser to improve your experience.
by Aldrin Calimlim
May 26, 2012
It can be argued that Apple is an extremely well-known company that thrives on utmost secrecy. For one thing, seldom, if ever, do we outsiders get a peek at the comings and goings of its workforce responsible for making the products we've come to admire. So when we do become privy, one way or another, to Apple's otherwise confidential operations, it's something of an event. Take for example the eye-opening video of Foxconn's iPad production line provided last month by American Public Media's Marketplace. Or if you want a newer case in point, check out the video below from Chinese news site iFeng, which shows the interior of the plant in China where nearly three quarters of Apple's iPhones are said to be made. If you can't see the video embedded above, please click here. The video documents a tour of the iPhone production line in Foxconn's Zhengzhou plant given by Foxconn CEO Terry Gou to a reporter from iFeng. It begins with the two overlooking the factory area from a helicopter. According to a translation from The Next Web, Gou says that the "wasteland" surrounding the factory has been reserved for its expansion. Inside the factory itself, the two proceed to observe some of the steps involved in the production of the iPhone 4S, particularly its display, motherboard, and camera. Along the way, Gou is quoted as saying that his factory is better than any of Apple's other manufacturing subcontractors. Having worked at the design section for a company that also makes consumer electronics, I can say that there's nothing peculiar about what's shown of Foxconn's typical production process. But as past industry reports would have us assume, its integrity with regard to the well-being of its employees is open to debate. Source: iFeng Via: The Next Web 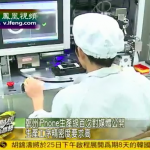