You are using an outdated browser. Please upgrade your browser to improve your experience.
by Aldrin Calimlim
May 16, 2012
Academy Award-winning screenwriter Aaron Sorkin has signed on to write a film based on the life of Steve Jobs, according to an announcement made today by Sony Pictures and posted on Deadline. Sorkin is set to adapt "Steve Jobs," the authorized biography of the late Apple tycoon written by Walter Isaacson, former CEO of CNN and managing editor of TIME. Published in October 2011, shortly after its subject's death from cancer, the book became an instant international bestseller. It was critically acclaimed upon its release, but its protractedness was an issue for some readers. Sorkin would have to condense more than 600 pages worth of interviews with and insights about Jobs in order to come up with material well-suited for a two-hour movie. And I, as well as my fellow Sorkinites the world over, don't have doubts that he ever could. He's done a fantastic job adapting "The Accidental Billionaires," Ben Mezrich's rather awfully written story about the founding of Facebook, into "The Social Network," for which he won an Oscar in 2011. Entrusted to a scribe whose impressive résumé includes "The West Wing," "Moneyball," and the upcoming HBO drama "The Newsroom," "Steve Jobs" is in more than capable hands. Not to be confused with the currently-in-production indie biopic called "Jobs," which stars Ashton Kutcher in the title role, Sorkin's new project is yet to get its own principal actor. Whoever he turns out to be, he better be prepared for a script that's infused with Sorkin's trademark blend of rapid-fire dialogue and character confrontations. Sorkin was famously asked by Jobs to write a Pixar movie. He politely declined the offer, citing his aversion to making inanimate objects talk. Well, now he has his work slightly cut out, as he gets to make a lot of Silicon Valley big shots, including arguably the biggest of them all, talking on screen. Source: Deadline Via: MacRumors 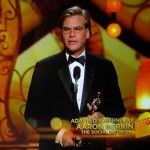