You are using an outdated browser. Please upgrade your browser to improve your experience.
by Brent Dirks
June 26, 2012
While a new 19-pin dock connector is almost certain for the next iPhone, Apple is also apparently working to change the way its devices can be charged. According to Patently Apple, the United States Patent and Trademark Office has granted Apple a patent for an inductive charging system. The system would allow wireless charging of your iPhone or iPod touch by simply placing the device on a specially designed dock with a reradiating antenna and inductive charging circuit. The site has more information about the particulars in the patent, originally filed in the first quarter of 2008:

Currently, no iOS device features wireless charging. But hopefully the patent is a sign of good things to come - especially as the dock connector has lost its importance with the advent of iCloud and wireless syncing. Before using an iPhone, the Touchstone inductive charging system was one of my favorite things about using the ill-fated Palm Pre. I’d like to see how Apple could make the technology work. Along with the induction charging system, Apple was awarded 27 new patents. Some of the new patents include scrolling lists, rotating and scaling documents on touchscreen displays, and a light-sensitive display. Source: Patently Apple Via: iDownloadBlog 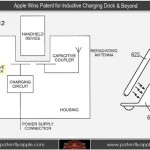 Apple Granted Patent For Wireless Charging System
Nothing found :(
Try something else