You are using an outdated browser. Please upgrade your browser to improve your experience.
by Joe White
June 13, 2012
Nathaniel Mott of PandoDaily has voiced his thoughts on Apple's Passbook app (pictured above), which will launch with iOS 6 later this year - he argues that, though Passbook doesn't plan to utilize a mobile payments service in the same way Google Wallet, for example, has attempted to do, the iOS 6-powered app might nevertheless be the wallet-replacing service to look out for. Apple, who announced Passbook at its WWDC '12 keynote presentation on Monday, describes the service thus:

Your boarding passes, movie tickets, retail coupons, loyalty cards, and more are now all in one place. With Passbook, you can scan your iPhone or iPod touch to check in for a flight, get into a movie, and redeem a coupon. You can also see when your coupons expire, where your concert seats are, and the balance left on that all-important coffee bar card. Wake your iPhone or iPod touch, and passes appear on your Lock screen at the appropriate time and place — like when you reach the airport or walk into the store to redeem your gift card or coupon. And if your gate changes after you’ve checked in for your flight, Passbook will even alert you to make sure you’re not relaxing in the wrong terminal.

One potential question on the lips of many, upon hearing the above - and in the wake of the growth of mobile payments services such as the aforementioned Google Wallet, which coincidentally first launched just over one year ago - might go something like this: Why is Apple concentrating on coupons and passes, when everyone else wants to turn the iPhone into a portable, electronic all-in-one wallet? Enter Nathaniel Mott's article - which reminds readers that, while Apple might not have concentrated initially on a mobile payments service, it nevertheless holds information for more than 400 million credit cards ("and counting"), "that Apple can use whenever it feels the timing is right." Most Apple fans have hooked a credit card up to one of its digital stores, and use this payment information to download songs, apps and e-books on a daily basis - we only need to look at the almighty cash-flow that runs into the App Store to remember that Apple, indeed, already has our credit card info on-file. Mott continues:

But the genius of Passbook is that it isn’t stopping there. It is looking so far beyond the credit card that it’s launching without any form of payments system in place, forgoing the credit card (for now) to grab control of the rest of the wallet.

He reminds us that Apple hasn't cued Passbook up to be a payment platform - something Apple "never mentioned" - but Mott also notes that the credit card isn't the only all-important member of the gang when it comes to users' wallets. I need only to check inside mine to recognise that the three payment cards I carry are surrounded by a hoard of membership cards, coupon-cards and store cards. If you think I'm going to pay for groceries without collecting my all-important store points, then think again. And according to Mott, this is Apple's mentality:

Reward cards that promise cash back if I’m willing to give out my email address and participate in an online survey, movie tickets, membership cards, and my driver’s license all call my wallet home. Any service that would finally convince me that it’s okay to purposefully (key word) leave my wallet behind would have to provide access to each of those bits of paper and plastic.

By allowing developers to connect to a number of APIs and baking support for a variety of cards and services directly into the application, Apple can capitalize developers’ love of the platform to quickly expand to serve, well, the entire iPhone market.

Ultimately, though Apple's Passbook app might be leaning away from mobile payments at the minute, Mott argues that by capturing the rest of the wallet early, a return to payments in the future could see our precious iPhones evolve Pokémon-style into iPhone-wallet hybrids - capable both of paying for users' purchases quickly and easily, and redeeming store-points at the same time. For Nathaniel Mott's original article, click the link below. Source: PandoDaily 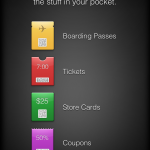 Apple's Passbook App Could Be The Mobile Payments Solution We've Been Looking For
Nothing found :(
Try something else