You are using an outdated browser. Please upgrade your browser to improve your experience.
by Bryan M. Wolfe
June 7, 2012
Facebook’s new mobile App Center could launch on iOS very soon. In fact, the social networking giant could use an app-themed press event the company is holding this evening in San Francisco to make the announcement, according to TechCrunch. Already being tested by a “small percentage of users,” Facebook’s App Center will offer users full access to Facebook-enabled mobile apps by way of their official iOS app. Among the rumored App Center features are: mobile sign-on, mobile versions of Facebook’s Credits virtual currency, and Open Graph hooks. Here are some screenshots of App Center, which Facebook released previously: For the life of me, I'm not sure why Apple would allow Facebook to implement App Center into their iOS app. But with Apple rumored to be showing Facebook some serious iOS 6.0 love, perhaps we shouldn't be surprised. We will keep you updated. Would you be interested in using apps directly from your Facebook app? Source and Photos: TechCrunch 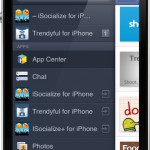 Facebook Set To Launch App Center For iOS?
Nothing found :(
Try something else