You are using an outdated browser. Please upgrade your browser to improve your experience.
by Joe White
June 13, 2012
Apple has made a bunch of improvements in iOS 6 (over 200, to be more precise), and a number of these changes involve the App Store application. As mentioned yesterday, the App Store has received a UI-overhaul, and looks - and works - much better than it does in iOS 5 and below. However, another change has been made to the built-in application which makes interacting with the App Store on an iOS 6-powered iDevice much easier than before. As Cult of Mac reports, in iOS 6 (and in OS X Mountain Lion), users are no longer required to enter their Apple ID passwords when downloading updates for applications. Currently in iOS 5, this is a requirement: as you'll all know, when installing an update in the App Store app, users must enter their Apple ID password before the update can download and install. But in iOS 6, this is a thing of the past. In addition to the above, Cult of Mac also notes that users are no longer required to enter their password when downloading applications that have been previously purchased. According to the website, this is the case for both iOS 6 and OS X Mountain Lion. Apple's iOS 6 - which is available in a beta version for Apple developers - should be released in fall, around the same time the sixth-generation iPhone is announced. OS X Mountain Lion, however, will launch next month for $20 in the Mac App Store. 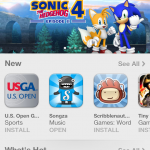 In iOS 6, You Don't Need To Enter Passwords For Updates And Previous Purchases

In iOS 6, You Don't Need To Enter Passwords For Updates And Previous Purchases
Nothing found :(
Try something else