You are using an outdated browser. Please upgrade your browser to improve your experience.
by Joe White
June 12, 2012
During yesterday's WWDC '12 keynote presentation, we spotted one iOS 6 improvement that Apple didn't directly address - the App Store: as we told you yesterday, it looks like a number of changes have been made to both the iTunes Store app and the App Store app - both applications feature a new design, which looks very impressive. Now, a video of the all-new iOS 6 App Store has hit the Web (via iDownloadBlog), which takes viewers through all the changes made to the App Store application in the sixth-iteration of Apple's mobile operating system. As you'll see in the video, the most remarkable change made to the application is its new interface: everything that used to be in the App Store app remains, but the layout and user interface of the application has been massively improved. It looks like it's much easier to browse through all aspects of the App Store from the iOS 6-powered iPhone. More specific changes include iOS app pages - pages dedicated to single apps, which provide users with sharing options, version history, related applications and more. Furthermore, when downloading an app from the new iOS 6 App Store, users are not taken back to the Home screen: instead, you can view the process of the app's download and installation right in the App Store application itself. This is certainly a change a great many Apple fans will appreciate. Take a look at the below walkthrough video, and for all other WWDC '12 keynote-related news, check out our summary post. Source: iDownloadBlog 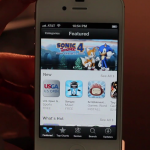 In iOS 6, Apple Sure Has Made Some Major Changes To The App Store Application

In iOS 6, Apple Sure Has Made Some Major Changes To The App Store Application
Nothing found :(
Try something else