You are using an outdated browser. Please upgrade your browser to improve your experience.
by A.T. Faust III
June 4, 2012
Last week, we all got a look at the potential final hardware for the iPhone 5. Now, we've got a glimpse of what its updated software might bring to the table. However, where the former is attributed to actual Apple sources in the know, the latter is simply the result of some good old guesswork and Photoshop know-how. The Verge forumite gizmosachin has the art, while MacStories has the background:

According to speculation surrounding the next major version of iOS, Apple will switch to a “silver” theme — roughly the same that has been used on the iPad since iPhone OS 3.2. Marco Arment believes the iPhone UIKit widget styling (the stock blue element) is out of style. Cult of Mac thinks that the recently released WWDC app and iPhoto for iOS set the stage for silver coming to the iPhone soon.

Keeping all that in mind, check out the following mockups depicting what most of the blogosphere expects Apple to unveil in the next version of iOS: Just remember that, particularly with the first image up there, gizmosachin is just having fun. The new Maps app may or may not have such cute, little paper-like creases (I love skeuomorphism!), but we're almost guaranteed to get this big batch of awesome anyway, so it's all good. The rest of the concepts, of course, are more to the point. And even though that "iPad gray" looks fantastic as the system's new color scheme, I'm holding out hope that the vertically-extended, aspect ratio-altering iPhone itself never makes it to production. Still, if it does, maybe Mobile Safari will finally get tabbed browsing! Via: MacStories Source: The Verge Forums 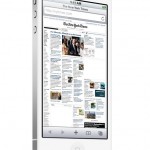