You are using an outdated browser. Please upgrade your browser to improve your experience.
by Brent Dirks
June 14, 2012
With iOS 6, apps now must request explicit user permission before receiving access to contacts, calendars, reminders, and photos. MacRumors first reported the information. The new policy is spelled out in the Data Privacy section of the iOS 6 release notes:

In addition to location data, the system now asks the user's permission before allowing third-party apps to access certain user data, including: - Contacts - Calendars - Reminders - Photo Library For contact, calendar, and reminder data, your app needs to be prepared to be denied access to these items and to adjust its behavior accordingly. If the user has not yet been prompted to allow access, the returned structure is valid but contains no records. If the user has denied access, the app receives a NULL value or no data. If the user grants permission to the app, the system subsequently notifies the app that it needs to reload or revert the data.

The issue of privacy came to the forefront in February when it was revealed that iOS app Path uploaded address books without specific permission from the user. At that time, Apple said a future software update will require apps to receive permission before accessing sensitive data. More recently, LinkedIn was snared in a privacy dustup as well. A previous version of the company’s app scraped every calendar entry for the next five days and sent it back to the company in plain, unencrypted text. Even though the feature was opt-in, LinkedIn issued an update that changed how calendar data was accessed. After being formally introduced at WWDC earlier this week, iOS 6 is expected to be released to consumers in the fall. Are you glad that the new version of iOS should (hopefully) put to rest any further privacy issues with how apps handle our private information? Source: MacRumors 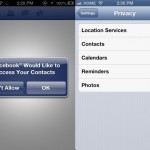