You are using an outdated browser. Please upgrade your browser to improve your experience.
by A.T. Faust III
June 13, 2012
While yesterday's slew of Apple announcements are each exciting enough to sufficiently pique our collective interest in the near-term future of the company's hardware and software offerings, perhaps the most standout unveiling is iOS' new Maps app. Apple doesn't always -- or very often, even -- invent wholly new technologies. Instead, they simply make widely unavailable or heretofore financially infeasible technologies profitable enough to produce on a large scale. We've often alluded to this when discussing Tim Cook's supply chain prowess, and those principles are a general reflection of Apple's overarching strategies in the consumer space. Apple didn't invent the MP3 player or smartphone, they made them mainstream. Nor did Apple invent the tablet computer, they just perfected and popularized its design and capabilities. Apple didn't even invent Siri, last year's biggest buzz word and selling point. Instead, they simply bought it, bettered it, and expanded its scope. And the same is true with their new Maps app. When Apple bought C3 Technologies last year, everyone started prepping Google's iOS Maps obituary. Now, we finally know why, as Apple has taken C3's CIA-funded, extremely expensive mapping tech and applied their own brand of knowhow, focus, scope, and savings to the project. Here's the state of C3's solution some half a year before Apple's purchase. The 2:30 mark will blow your mind: We can only imagine how much streamlining and content expansion Apple's put in by now. But, amazing as the new iOS Maps is bound to be, it's important to note that, in concept, this technology is far from fundamentally new. For all practical purposes, in fact, it actually dates back to World War II, when allied forces united to capture and assemble a series of low- and mid-altitude images -- in stereoscopic 3-D! -- uncovering Nazi Germany's various rocket silos and strongholds. The methods and results have come a long way, but man's ability to actually create something like this has been around for a long time. So, as with anything, let's make sure to give credit where credit is due. Apple didn't invent 3-D aerial photography or revolutionize the manner in which such data is collected. Instead, the company simply did what they always do: They brought an exclusive, expensive technology into the mainstream and put it in the palms of our hands. And that, friends, is one heck of an achievement. 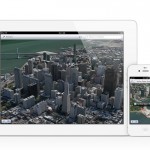 New Maps App Is A Microcosm Of Apple's Winning Philosophy

New Maps App Is A Microcosm Of Apple's Winning Philosophy
Nothing found :(
Try something else