You are using an outdated browser. Please upgrade your browser to improve your experience.
by Bryan M. Wolfe
June 29, 2012
We’ve already heard that Apple is planning a complete refresh of iTunes for Windows and Mac, and for iOS. Now, they seem to be tinkering with their App Store algorithm, according to TechCrunch. Beginning last week, Apple began changing how App Store searches are processed. As a result, more emphasis was placed on user ratings and app descriptions, rather than on the names of the apps themselves. Additionally, Apple is said to have been putting a bigger emphasis on keywords plus names. These changes, which seem to have been temporary, suggest that Apple is looking for new ways to promote the 600,000 apps currently in the App Store. As Tomasz Kolinko, a developer and one of the founders for App Store analysts Appcod.es notes, the changes might mean very little to customers, but for developers it is a different story.

It is important for the developers, though. Last week plenty of iOS devs were pushing the updates to fix their keywords, because many of them stopped appearing on the search result list.

Earlier, we reported that Apple would be using their acquisition of Chomp to retool the App Store’s search and discovery capabilities. It appears that last week’s changes, though temporary, were part of that retooling. For developers who count on App Store search ratings to generate revenues, Apple’s tweaks can have long-term consequences. This is especially true while the changes made in the App Store remain in transition. We’ll keep you updated. In the meantime, have you noticed App Store search changes recently. Source: TechCrunch 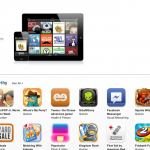 What Is Apple Doing To The App Store?

What Is Apple Doing To The App Store?
Nothing found :(
Try something else