You are using an outdated browser. Please upgrade your browser to improve your experience.
by Bryan M. Wolfe
July 11, 2012
Proving that they plan on competing with Apple in multiple ways, Amazon has announced GameCircle, a Game Center-like API for developers. The new feature will soon be available on the Kindle Fire. GameCircle offers gaming customers a series of features, including achievements, leaderboards, and sync. With achievements, customers earn trophies, treasures, badges, and awards each time they use their Kindle Fire to play games. They can also pause a game, view an achievements summary, determine what badges are still needed or desired, and then return to gameplay. Leaderboards provide an in-game view of score comparison information and percentile ranking, allowing players to check standings against other players without leaving the game. Finally, Sync automatically saves players’ in-game progress to the cloud and allows them to pick up exactly where they left off when restoring a deleted game or switching between their devices. According to Paul Ryder, vice president of apps and games at Amazon:

The new GameCircle APIs mean that developers don’t have to worry about building leaderboards, achievements or sync in their games – they can focus on the elements of their games that are truly unique while building an immersive, more entertaining experience on Kindle Fire. This will quickly help developers grow their business by reaching more customers and keeping them engaged.

Today’s news suggests Amazon is committed to the Kindle Fire platform, despite weak sales for the first-generation tablet. Additionally, GameCircle’s arrival could prove once again that Amazon is working on a Kindle-inspired smartphone. First launched in November, the Kindle Fire was supposed to take on the iPad. However, despite promising fourth-quarter sales, the 7-inch tablet has largely been unsuccessful against Apple’s more expensive device.  A second-generation Kindle Fire model is expected to arrive in September or October. GameCircle’s debut comes ahead of the likely launch of Android’s own Game Center-type API, which was first rumored in May.  The Kindle Fire runs its own version of Android and its users download apps outside of Google Play. Check out this preview video for GameCircle:   Will the arrival of GameCircle make you more likely to buy a Kindle Fire? 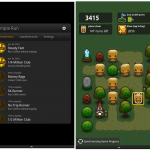 Amazon Launches Their Own Game Center For Kindle Fire

Amazon Launches Their Own Game Center For Kindle Fire
Nothing found :(
Try something else