You are using an outdated browser. Please upgrade your browser to improve your experience.
by Bryan M. Wolfe
July 6, 2012
First came the Kindle Fire. Now Amazon is working on a Kindle phone that will take on the iPhone and Google Android smartphones, according to Bloomberg. In unsurprising, the Seattle, Washington company is said to be gearing up to launch their own cell phone. More surprisingly, Foxconn, which is Apple’s largest manufacturing partner, is said to be the company that will product the rumored handset. First launched last fall, the Kindle Fire was supposed to take on the iPad. However, despite promising fourth-quarter sales of 4.7 million units, the 7-inch tablet has largely been unsuccessful against Apple’s more expensive device. During the same quarter, Apple sold 15.4 million iPads. However, no one should count Amazon out – in either market. Despite an onslaught of Android-based phones and tablets, Amazon has one thing the others guys do not: the largest online marketplace on the planet. As such, they have the resources to bring all the necessary media to their devices on day one. In doing so, they, like Apple, can give customers a complete mobile experience. Besides, Amazon has a history of not quitting. Despite early design problems with their first-generation Kindle, Amazon continued improving their flagship product. Today, the Kindle remains the best-selling e-reader in the world. Going forward, the company is expected to release an improved Kindle Fire, which could affect sales for Apple’s iPad, as well as Google’s upcoming Nexus 7 tablet. It will be interesting to see what a Kindle Phone would look like. Our best bet is that the handset will look a lot like the Kindle Fire only smaller in size and without its first-generation problems. Would you buy a Kindle Phone? Source: Bloomberg 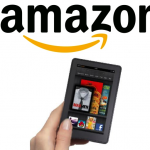 Welcome To The Smartphone Market, Amazon

Welcome To The Smartphone Market, Amazon
Nothing found :(
Try something else