You are using an outdated browser. Please upgrade your browser to improve your experience.
by Brent Dirks
July 20, 2012
Apple will announce its Q3 2012 earnings in a call at 5 p.m. EDT on Tuesday. The company’s Q3 ran from April 1 to June 30. While it’s expected that the most interesting news from the call will be on the Mac side – more specifically the exact date of when the newest OS X version, Mountain Lion, will be officially released – there should be some interesting iOS information as well. During the company's 2012 second quarter, 35.1 million iPhones were sold, representing an 88 percent growth over the same period last year. The iPhone accounted for $22.7 billion in revenue during the quarter. But it will be interesting to see what those iPhone numbers look like for the most recent quarter. This week, Verizon announced that its iPhone sales were down 16 percent in its most recent quarter as consumers are apparently holding off their purchases until the new iPhone is released sometime this fall. And we’ll see if the iPad’s huge sales numbers continue to have legs. In the first three months of the year, Apple sold 11.8 million tablets, a 151 percent increase over the same period in 2011. Anyone interested in listening to the call live can visit here. Streaming audio requires an iPhone, iPad, or iPod touch running iOS 4.2 or above, any Mac running OS X 10.5 or above, or any PC running QuickTime 7 or later. We’re planning on covering the call live and will keep you up to date with what Apple has to announce. 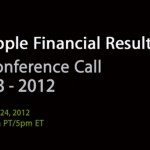 Apple's Q3 2012 Earnings Call Set For Tuesday
Nothing found :(
Try something else