You are using an outdated browser. Please upgrade your browser to improve your experience.
by Brent Dirks
July 6, 2012
Who needs an Apple patent to bring wireless charging to an iOS device? According to Ubergizmo, a London hacker has developed a caseless solution to wirelessly charge his iPhone 4S. Tanveer Islam, a doctor by day and hardware hacker during his spare time, has used some serious electrical engineering skills to make the process work. Here is a quick video with some step-by-step instructions. Click here if you can’t see the video. The process isn’t exactly for the everyday consumer. He used a Powermat, a spare charger port assembly, a thin gauge wire, soldering tools, and the back of an iPhone 4S. And obviously, once you complete a modification like this, expect that whatever warranty Apple provides to be invalidated. Surprisingly, the modification didn’t greatly increase the thickness of his device. Adding the wireless capability only added around 1 millimeter. And to really rub it in, Islam also made his own special iPhone 4S commercial to highlight the modification. Click here if you can’t see the video. Apple was recently granted a patent for a wireless charging system very similar to Islam’s. The wireless charging Touchstone mechanism on the ill-fated Palm Pre was pretty much my favorite part of using the phone. Hopefully, Apple can make something like Islam’s system a reality in the next iPhone. Source: Ubergizmo Via: BGR 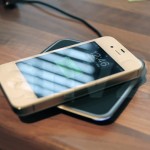 Hacker Makes His Own Wireless iPhone 4S Charging Solution
Nothing found :(
Try something else