You are using an outdated browser. Please upgrade your browser to improve your experience.
by Joe White
July 19, 2012
Apple has been releasing betas of iOS 6 for iDevice owners since its WWDC '12 keynote, and new, prerelease versions of an upcoming update for Apple TV sets has also been seeded to devs. Now, in the latest (third) beta version of this Apple TV software, a new AirPlay feature has been added to the company's set-top box, as iDownloadBlog reports. According to the website, in the third beta version of the upcoming Apple TV software, users will have the power "to stream audio from their set-top boxes to external AirPlay-enabled speakers." The new feature was originally highlighted by FlatpanelsHD, who notes:

Soon-to-be-released iOS 6 has a new interesting feature for the Apple TV box. In the AirPlay menu users can now select which AirPlay-enabled speakers they want the TV sound coming out from. Never again will you have to use audio cables when connecting external speakers to your TV.

In similar news, Apple has also added icon customization in its upcoming Apple TV OS. Like iOS 6, the new Apple TV OS is expected to become available this fall. If you're a developer running the software, have you spotted anything new in the prerelease Apple TV OS? Let us know, by shooting us an email: [email protected]. Source: FlatpanelsHD Via: iDownloadBlog 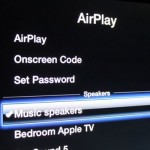 In Third Beta Of Upcoming OS, Apple Adds A New AirPlay Feature To Apple TVs
Nothing found :(
Try something else