You are using an outdated browser. Please upgrade your browser to improve your experience.
by Joe White
July 31, 2012
Even though Apple hasn't pushed the iPhone or iPad as stylus-powered iDevices, fans keep leaning towards the idea of using a stylus with their iOS-powered smartphone or tablet. One new jailbreak tweak to ride on the wave of this hype is 'Handwriting recognition' which, as its name suggests, promises to provide users with a handwriting-to-text experience on their jailbroken iDevice. Once downloaded and installed, users can activate 'Handwriting recognition' via Action Menu (that's the copy-and-paste menu), meaning you can start writing in any text field imaginable. Touching 'Draw' launches the handwriting interface: the screen dims, an 'OK' icon (which ends the handwriting process) appears at the bottom of the iDevice's screen, and jailbreakers are free to start writing away with a stylus or finger on their smartphone or tablet. After you've finished writing, scrawl is (hopefully) converted to text, and then inputted in the open text field. However, before you get too excited, let us warn you: it's not all good news. Basically, as iDownloadBlog surmises, the problem with 'Handwriting recognition' is that it doesn't process text in a space-efficient way. The website explains:

The iPhone’s screen just isn’t big enough to use Handwriting recognition effectively. The way it handles overlapping text negates any usefulness that may have been derived from the tweak. The main issue stems from the fact that anytime you overlap text, it creates new words based off the jumbled text blob, instead of forwardly progressing. This makes it impossible to write out anything more than a couple of words on the iPhone.

On the iPad, it's (mostly) all good news, because of the additional screen space the tablet offers. But even here, if you overlap your text, 'Handwriting recognition' will have a hard time making sense of what you wrote. Ultimately, the tweak is promising. But it also rocks a price-tag of $0.99, meaning jailbreakers might rather wait until the package has been updated (and, hopefully, improved) before dropping a dollar on 'Handwriting recognition'. For more information on the jailbreak tweak, take a look at iDownloadBlog's video walkthrough below. 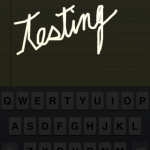 New 'Handwriting Recognition' Jailbreak Tweak Could Be Great, But Isn't

New 'Handwriting Recognition' Jailbreak Tweak Could Be Great, But Isn't
Nothing found :(
Try something else