You are using an outdated browser. Please upgrade your browser to improve your experience.
by Brent Dirks
July 14, 2012
I always like to seek out unique iPhone cases. And the SkateBack from Grove definitely falls into that category. Grove, based in Portland, Ore., has been previously known for both its iPad and iPhone cases made from 100 percent bamboo. The iPhone version is particularly interesting as buyers can choose a plain case or one meticulously constructed with a number of designs. And now the company has branched out, teaming with MapleXO, to create an iPhone 4/4S backplate – the SkateBack. You might not have heard of MapleXO, and for good reason – it’s not an iOS device accessory maker. Started in 2005, the company’s mission is to recycle skateboard waste by making jewelry and other accessories. The recycled material is sourced from skateboard maker Paul Schmitt of PS Stix in Costa Mesa, Calif. By making up to 4,000 skateboards per day, the company discards enough scrap wood to fill a city bus in a week. And instead of all of that waste ending up in a landfill, the companies are now offering a unique way to protect your iPhone.

Installing the SkateBack is probably the easiest time you’ll ever have with an iPhone protector. Simply peel off the protective back and stick it on your handset. The 3M adhesive provides a strong bond to the back of the handset, but it’s not something that you can remove more than a few times before the stickiness wears off. With each SkateBack being handmade, every one will be slightly different. The Vibrant version I received really stands out with strips of multi-colored wood running down the length of the backing. It’s unique and definitely has a personality. While trying it out, I was stopped more than once by people wondering exactly what the SkateBack was and where they could get one. 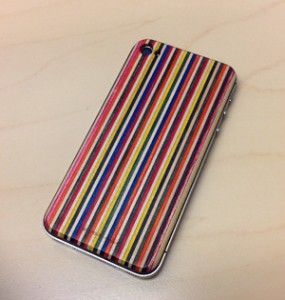 Once installed, the SkateBack feels very nice and natural. The wood is sanded down and feels great to the touch. It only adds 1/16 of an inch to the thickness of the iPhone, and that’s small enough that it is barely noticeable.

One word of warning, though. If you like to use your flash while taking photos with your iPhone, the solution simply isn’t for you. I’ve used some cases that somewhat distort photos with the flash, but the SkateBack is a different animal. Every single photo I took with the flash on was a washed out, unusable mess. Surprisingly, Grove is even kind enough to be upfront about the issue on its site, saying that “performance will vary greatly depending on distance from subject and ambient light.” But in my testing of the Skateback, every single photo, no matter the subject, surroundings, and distance was unusable when the flash fired. That’s extremely disappointing, and might be a deal breaker for some potential buyers. Also, the SkateBack isn’t for every iPhone user. It’s really designed to help brighten up the back of your handset, and isn’t made for drop and fall protection like rugged cases. It might help fend of a tiny scratch or scuff to the back glass, but that’s about it. And while the solution isn’t all that bulky, using other accessories like built-in battery cases, is out of the question.

Along with the Vibrant, Grove also offers two other styles of SkateBack. The less busy Calm style features yellow and blues while my personal favorite, Neutral, sports dark grays and blacks with the natural wood colors. All three styles can be purchased directly from Grove for $49.99. While the price may be a little high for what amounts to just an iPhone backing, the SkateBack is a unique and environmentally friendly choice to set your iPhone apart from the crowd. And if you’re like me, this is the best you’ll ever look near a skateboard. But you’ll have to be content turning your flash off. 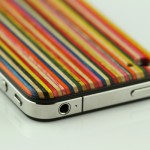 Product Review: Grove’s SkateBack Is A Fun Way To Brighten Up Your iPhone

Product Review: Grove’s SkateBack Is A Fun Way To Brighten Up Your iPhone
Nothing found :(
Try something else