You are using an outdated browser. Please upgrade your browser to improve your experience.
by Bryan M. Wolfe
July 18, 2012
Steve Jobs was never accused of being warm and cuddly, especially when it came to dealing with other business leaders. Don't believe me? Check out Jobs' comments about Google's former CEO, Eric Schmidt. However, the late Apple founder did seem to have an appreciation for Mark Zuckerberg, the 28-year-old founder of Facebook, according to Business Insider. In a new, and long-ranging interview Jobs’ official biographer, Walter Isaacson, states that the reason Apple didn’t “crack the code on social” was largely because of Facebook’s success. According to the late Apple CEO, as relayed by Isaacson:

Maybe because Mark (Zuckerberg) did it so well. There's not a need for a whole lot of social networks and Facebook has got it licked."

Jobs, it seems, admired Zuckerberg’s “intuitive feel.” As such, Jobs felt that Zuckerberg was willing to:

Do stuff that allows him to be on shifting sands—his willing to cannibalize old things. He felt an odd kinship to Mark.

Recall that Apple’s only foray into social was the introduction in 2010 of Ping, a music-oriented social network that the company plans on putting out of its misery later this year. Since then, Apple has worked closely with Facebook and with Twitter to integrate their services into iOS. In fact, I suggested in June that Facebook was so integrated with iOS 6, that I asked, “Why would Facebook release their own phone, when Apple is doing this for them?” It looks like Jobs’ admiration for Zuckerberg continues, even from the grave. Whether that is good or bad remains to be seen. Source: Business Insider 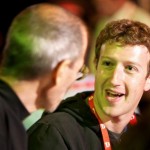