You are using an outdated browser. Please upgrade your browser to improve your experience.
by Stella Violano
July 2, 2012
In the field of cutting-edge technology where most big companies barely give a thought to accessibility, Apple deserves kudos for ensuring that disabled users can also ride the wave of the future. When the App Store opened in July of 2008, I was hooked. My iPhone suddenly held unlimited potential — the future was here and it came in the form of thousands of apps packaged behind a sleek, glass touch screen. Unfortunately, my enthusiasm was dampened by a friend who expressed outrage when I showed him my iPhone. He wondered how his wife, who is blind, could use technology so clearly designed for visual navigation? Suddenly I saw the iPhone from a tactile perspective. Without visual input, the sleek interface was completely useless. How could a progressive company like Apple turn its back on the estimated 11 million potential users with visual disabilities? Then I discovered the answer: Apple did not exclude anyone. In fact, they built into iOS an impressive array of accessibility features. These remarkable features can be found and activated in the general area of the settings menu. VoiceOver is one of the most impressive features for users who are blind or visually impaired. It adds voice-guided prompts to interact on the touch screen, navigate apps, and for reading text. VoiceOver allows apps to verbally identify colors, light, money denominations, and much more. Blogger Stephen van Egmond recently attended an iDevice User Group at the Canadian National Institute for the Blind. He was particularly blown away by how VoiceOver allowed the members to take pictures:

I simply gawped when one blind woman pulled out an iPhone then snapped a perfect shot, guided by the built-in Camera app.


This is truly amazing. But the built-in Photos app has no way of voice labeling the images. They are stored as numbers, not exactly convenient for reviewing and sharing. We are hoping that, in the future, the Camera app will allow users to add some sort of voice label to each image, which could be played in the Photos app. This way, they'd be able to actually find a photo they took. Apple did not just add features for users who are blind. Those who are hard of hearing can adjust their sound for use with hearing aids, set mono audio, and use custom vibration and flash alerts. Apple also allows iBooks to be embedded with sign language. For those with impaired motor control, Apple added gestures and the ability to send incoming calls automatically to a speaker or headset. Even more features for the disabled are coming in iOS 6. Best of all, Apple has always allowed, and encouraged, independent developers to use these features when creating iDevice apps. Unfortunately, the majority of apps in the App Store are not yet accessible, but there are signs that this trend is changing. Last year we created our first AppList for users who are blind. It has since grown to two AppLists containing over sixty apps with a dozen more under consideration. We have also identified enough apps to create our AppList for users with hearing disabilities. So what might be on the iDevice and iOS wish list for the disabled in the future? An app that would reliably display movie and television subtitles, for those with diminished hearing. Improved optical character recognition (OCR) technology to read text aloud would be a dream come true for those with vision loss. Current apps that offer OCR are not yet advanced enough to reliably read a menu in a restaurant. For Apple, the wish list would include adding a "search by accessibility" filter in the App Store. Aside from networking with others, disabled users have to take a gamble and purchase an app without knowing if they can use it. Being able to filter apps by accessibility would be the crowning achievement to Apple's incredible accessibility efforts. And to developers: Apple has paved the way — follow their lead and make your apps accessible for everyone. It will be worth your effort as your app will be available to a very large and grateful group of users. What else might be added to the future iDevice and iOS wish list to better aid everyone? Do you think the future will hold any other amazing breakthroughs? 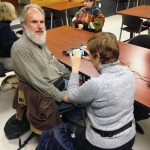 Technology For All: Apple Paves The Road To Accessibility

Technology For All: Apple Paves The Road To Accessibility
Nothing found :(
Try something else