You are using an outdated browser. Please upgrade your browser to improve your experience.
by Brent Dirks
July 13, 2012
The Bluetooth-powered Pear project on Kickstarer brings a simple solution to a unique problem while using speakers with an iOS dock. While playing music, users are unable to do simple tasks like email or talk on the phone because the handset is docked. But the small Pear replaces your iPhone on the dock, allowing you to rock out wirelessly while still using your handset. Just like a hands-free headset or other Bluetooth device (like the Hone Kickstarter), the Pear is simple to sync and connect. Here’s a quick overview video of the technology. Click here if you can’t see the video. Using Bluetooth 2.1 technology, the Pear can pair with up to eight devices, but only one at a time. For a $40 pledge, you can reserve one Pear in the arctic white or jet black color. And there’s no need to worry if the Pear will be fully funded. As of right now, with 58 days to go, the project is achingly close to achieving its goal of $40,000. With just a few more backers, it will be a reality. This is really a great idea, and I’m glad to see technology like this won’t automatically push a large number of speakers into obsolescence when the next-generation iPhone is (probably) released with an incompatible connector. It’s also nice for people, like me, who like to use protective cases but don’t want to remove it to use a dock. 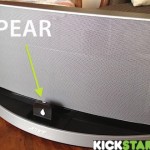 The Pear Kickstarter Brings Juicy Bluetooth Technology To Speakers With An iOS Dock
Nothing found :(
Try something else