You are using an outdated browser. Please upgrade your browser to improve your experience.
by Joe White
July 6, 2012
Jailbreakers love Cydia - Jay Freeman's (@saurik) "jailbreak application store," which houses all the apps and tweaks we post about each and every week. However, though Cydia has been working well since its launch, the application itself hasn't received much of a redesign over the years. In the wake of the launch of Apple's all-new App Store app (in iOS 6), we're asking: is it time Freeman gave Cydia a makeover, too? This is exactly the question posed by one AppAdvice reader, who recently sent us his ideas on how Jay Freeman might bring the Cydia application into the current era of iOS app design. In a series of screenshots, he's outlined how the Cydia app might be greatly improved - and we think his ideas are actually rather impressive. First up, as you can see in the above image, our tipster (Jason Morcos) thinks the Cydia app should look like iOS 6's iTunes Store and App Store apps, which have traded-in their blue UI look for a dark, black appearance. In addition, he thinks users should be prompted to sign-in to their Cydia account upon launching the app, if they haven't already. Morcos also speculates how sections (in the "Sections" tab) could be hidden with a swipe, allowing users to customize exactly what appears in this part of the app. This is another great idea, as users most likely don't interact with all the sections listed here. Through hiding sections that aren't relevant to individual users, the Cydia experience could indeed be much improved. Finally, in this imagining of the Cydia app, a "My Tweaks" section is present along the bottom-row of tabs. It would appear that Morcos hopes that users might be able to add their favourite tweaks to this section of the Cydia app, and have the option of syncing these much-loved tweaks between jailbroken iDevices linked with users' Cydia IDs, as you can see in the below image. Further design changes have been made to the Cydia app in Morcos's idea - you can look through all the screenshots of his imagining of the new Cydia app below. More importantly, let us know your thoughts on this concept: do you think Jay Freeman should take some advice from Morcos, and implement some of his ideas? Be sure to post your thoughts in the comments. [gallery columns="4"] Thanks to Jason Morcos for sending us his concept! 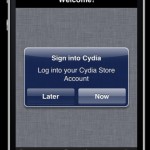 This Cydia Concept Shows How The Jailbreak App Store Could Be Greatly Improved
Nothing found :(
Try something else