You are using an outdated browser. Please upgrade your browser to improve your experience.
by Bryan M. Wolfe
August 16, 2012
Updated: Dow Jones now says the information in the report mentioned here is false, stating via 9to5Mac:

In a communication with store leadership teams, senior vice president of retail, John Browett, who took the reins of Apple’s retail stores in April, said that the company had been trying a new staffing formula for its retail stores, leading some employees to see their hourly shifts cut and retail locations to be understaffed. This happened for a few weeks before the company decided to revert to its older system, hoping to rectify the problem…He instructed leadership teams to tell employees, “We messed up,” according to two people who were aware of the communication, which also stressed that while shift schedules were affected, no one was laid off. He also wanted employees to know that it was hiring new staff, these people said.

As originally published: It’s no secret that Apple is about to enter the busiest time on their sales calendar. In less than a month, the new iPhone will debut, and that says nothing about the approaching holiday season. So why is Apple laying off retail employees, and cutting hours? According to ifoAppleStore, Cupertino’s new Senior Vice President of Retail, John Browett, is taking steps to make retail operations leaner, and boost the company’s profit margins. To do so, however, employees seem to be getting short-changed. Browett, who replaced Ron Johnson in May, is said to believe that Apple’s retail stores have become “too bloated.” To correct this, he has begun laying off employees who can’t work part-time, reduced or eliminated overtime, and has stopped promotions. All of this sounds quite surprising. For one, fewer employees could make Apple’s rollout of the next iPhone even more frustrating to customers, especially for those that plan on making their purchase on the first day. For another, it wasn’t that long ago that Apple promised more, not fewer, benefits for employees who are often underpaid and overworked. There is nothing wrong with wanting to improve profit margins. However, each Apple employee is said to already be generating about $420,000 in sales each year, which is unheard of in the retail industry, especially in a slow economy. This comes as the average employee takes home only about $25,000. Hopefully, Browett’s changes won’t affect the overall Apple retail store experience, which has always emphasized customer service, and the “five steps of service.” These steps are: Approach in a warm manner, Probe politely, Present customers with a solution that may not involve a sale, Listen carefully, and End with an invitation to return. We’re about to find out. The sixth-generation iPhone is expected to go on sale in the U.S. on Friday, Sept. 21. Source: ifoAppleStore 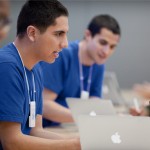 Updated: Apple Employees Are Being Sacked Just In Time For The New iPhone Launch

Updated: Apple Employees Are Being Sacked Just In Time For The New iPhone Launch
Nothing found :(
Try something else