You are using an outdated browser. Please upgrade your browser to improve your experience.
by Brent Dirks
August 6, 2012
Apple has just released iOS 6 beta 4 to developers. The update is available over the air and on the Apple Developer website. We'll be looking for any major changes in the latest version and let you know what we find out. So far, the changelog is showing fixes in Facebook integration, the Address Book, authorization statuses, and the Apple TV/Bonjour workflows. There are also patches for Dictionary, iTunes, Maps, and other apps. And probably the biggest surprise so far is that the integrated YouTube app, which has been a staple of iOS since the original iPhone was introduced in 2007, seems to be missing. It is unknown whether its some kind of bug specific to the beta, or if the built-in app is a casualty of the Apple-Google battle. The final version of iOS 6 is expected to be released along with the next-generation iPhone in September. It's been a little less than a month than since last beta of iOS 6 was released to developers. 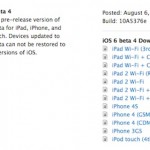 YouTube App Disappears In Latest iOS 6 Beta
Nothing found :(
Try something else