You are using an outdated browser. Please upgrade your browser to improve your experience.
by Aldrin Calimlim
August 31, 2012
Marco Arment appears to have a knack for turning out notable Apple-related discoveries. Last month, the esteemed developer of Instapaper was the first to sound the alarm about a widespread app update corruption. Now, he has stumbled upon a couple of possible clues to the existence of the so-called iPad mini. In his most recent blog post, Arment relates the emergence of a couple of “curious entries” in the access logs of his popular read-later app. These entries refer to two device models identified as iPad2,5 and iPad2,6. He also acknowledges the appearance of iPhone5,1 in Instapaper’s stats. But he dismisses it as a nonevent in light of the near certainty of the so-called iPhone 5’s release next month. As noted by Arment, iPad2,1, iPad 2,2, and iPad2,3 are the device codes for the original iPad 2’s Wi-Fi, GSM, and CDMA models, respectively. As for iPad2,4, it applies to the cheaper, die-shrunk iPad 2 that was released alongside the third-generation iPad. Arment admits that the new iPad2,5 and iPad2,6 device identifiers could be just the doing of a jailbreaker. But he reasons that “I’ve never had a device show up there that didn’t end up being a real, about-to-be-released Apple device.” He also admits that the iPad2,5 and iPad2,6 could be just the GSM and CDMA models of the die-shrunk iPad 2. But, again, he reasons that “even later in its lifecycle, that would be a pretty strange move.” Which points to the growing possibility of the iPad mini. According to Arment, iPad2,5 and iPad2,6 may very well be the Wi-Fi and GSM models of the long-rumored 7.85-inch tablet in the hands of select Apple employees. “If so,” he adds, “this suggests that the iPad Mini is, effectively, an iPad 2: an A5 with 512 MB of RAM and enough GPU power to drive the Gruber Display, but not a Retina Display." “Gruber Display” alludes to John Gruber’s belief that the iPad mini, should it come to fruition, will have the same non-Retina resolution as the iPad 2 (and, by extension, the original iPad) wrapped in a 7.85-inch display. The feasibility of a non-Retina 7.85-inch screen, if you’ll recall, was established by our very own A. T. Faust way back in March. The iPad mini is expected to be unveiled by Apple sometime in October, following the launch of the equally, if not more, anticipated iPhone 5. Source: Marco Arment 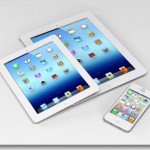 I Spy The iPad mini: Instapaper Developer Log Suggests Existence Of Long-Rumored Tablet
Nothing found :(
Try something else