You are using an outdated browser. Please upgrade your browser to improve your experience.
by Brent Dirks
August 7, 2012
With just a little more than a month before the next-generation iPhone is expected to be announced, the pieces seem to continue to fall in place for a handset with a larger screen. According to 9to5 Mac, the upcoming iOS 6 is scalable to 640x1136, the apparent resolution of a larger, 4-inch iPhone. Currently, the 3.5-inch screen of the iPhone 4S displays four rows of icons along with a dock on the bottom of the handset. But 9to5 Mac was able to show, as pictured, that when a developer tool – called the iOS Simulator – was set to a 640x1136 resolution, five full rows of icons were displayed along with the home screen dock. When iOS 5.1 was run in the simulator with a 640x1136 resolution, the four rows of icons were simply stretched out, as pictured above. Since the next-generation iPhone will ship with iOS 6, this is yet another strong sign that handset will feature a 4-inch screen. The idea of an iPhone with a larger screen began to take hold in May when photos of the supposed new parts began to leak. Those photos showed a taller, but not wider, screen that measured in a 3.999 inches diagonally with a 16x9 widescreen aspect ratio. The new iPhone is expected to be announced on September 12 with the handset going on sale 10 days later. A new iPod touch and the iPad mini may also be unveiled at the same event. Source: 9to5Mac 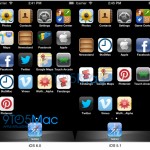 Tests Show iOS 6 Scales To Rumored Resolution Of The Next-Generation iPhone
Nothing found :(
Try something else