You are using an outdated browser. Please upgrade your browser to improve your experience.
by Joe White
August 5, 2012
Though Cydia really is the unbeatable go-to "jailbreak app store" for fans rocking a jailbroken iDevice, one new alternative has recently launched. Called "iDebStore" and currently available in a closed-beta ("alpha") version to a select number of jailbreakers, this new store provides users with a Web-based alternative to Jay Freeman's Cydia Store, which some jailbreak fans might find appealing. In the past, Cydia alternatives haven't fared well: Rock was acquired by Cydia back in September, 2010, and iTweakStore has still yet to launch. Though this history means the future of iDebStore might not look bright, as Redmond Pie reports, the jailbreak application store is nevertheless a promising development:

A few of the noted benefits of using a method such as this include having an extremely simplistic user-interface which allows all levels of users to get involved, and is also available across all versions of iOS thanks to the web-based method of access. Speed is also a big selling point, with the developers promising that iDebStore will be amazingly fast and will have the ability for users to log into an account to gain access to all downloaded packages, something that eliminates the need for backups of jailbroken installations.

Because of its Web-based nature, iDebStore users will also be able to access the service on desktop computers. It's going to be difficult - that is, almost impossible - for a Cydia alternative to usurp Jay Freeman's powerful creation. After all, most of our favourite jailbreak tools install the Cydia app while the actual jailbreak process takes place. Nevertheless, it will be interesting to see how iDebStore develops and, as Redmond Pie notes, if the idea "gets past the beta stage." You never know, this might be the start of something brilliant. If you've been playing around with the alpha version of iDebStore, be sure to let us know your first impressions in the comments. Source: Redmond Pie 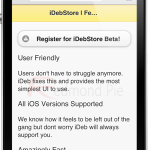 The New iDebStore Alpha Provides Jailbreakers With A Promising Cydia Alternative
Nothing found :(
Try something else