You are using an outdated browser. Please upgrade your browser to improve your experience.
by Aldrin Calimlim
August 8, 2012
Apple has just released a new ad highlighting the all-purpose quality as well as the high-resolution screen of the third-generation iPad. "From reading a magazine to helping your business run smoothly," reads Apple's video description on its YouTube channel, "you can do just about anything on iPad. And with Retina display, it's all more beautiful than ever." You can watch the 31-second video below. Titled "All On iPad," the ad features Apple's own apps, including iBooks, Safari, and FaceTime, as well as a few third-party ones. As these apps are shown in action one by one, the following voice-over is heard:

Read it. Tweet it. Be surprised. Be productive. Make a sale. Make some lunch. Make it movie night. Play a game, or an old favorite. Do it all more beautifully, with the Retina display, on iPad.

If you can't see the video embedded above, please click here. Come to think of it, the new ad may be more accurately described as not-so-new. If the ad looks and sounds familiar, it's because it is. Just last June, a very similar iPad ad called "Do It All" was released by Apple. Having the same narrator, music, and overall intent as the current one, the previous ad also comes with an "instructional" voice-over:

Send a note. Stay informed. Catch a show. Make your point. Make a memory. Make a masterpiece. Read something. Watch something. And learn something. Do it all more beautifully, with the Retina display, on iPad.

Although it's practically a repeat of a previous ad, I very much prefer this latest ad over the other ones released by Apple in the past few months. Its straightforward and well-defined approach puts it in rather stark contrast to the recent celebrity-heavy Siri ads and, to a greater extent, the cringe-inducing "Genius" Mac ads. 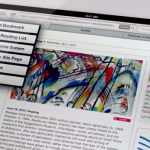 You Can Do 'All On iPad,' Says New Apple Ad

You Can Do 'All On iPad,' Says New Apple Ad
Nothing found :(
Try something else