You are using an outdated browser. Please upgrade your browser to improve your experience.
by Bryan M. Wolfe
September 5, 2012
Besides the next iPhone, Apple could also unveil the very first iPad Mini at their media event next week. Now the folks at MacRumors, working with CiccareseDesign, have released renderings and a video showing Cupertino’s smaller tablet. Each is based on the latest rumors and leaks regarding the possible iOS device. As you can see by the comparison shot, the iPad Mini offers 66 percent of the surface area of the current 9.7-inch new iPad. Additionally, it includes 40 percent more surface area than already released 7-inch tablets. Take a look: The latest rumors suggest Apple will release to the public the iPad Mini after the new iPhone launches in stores. What remains unknown is whether Apple will reveal the new tablet at next week’s event in San Francisco, or at a separate event later this fall. Earlier this week, Brent Dirks reported on a separate iPad Mini mockup that includes a significantly thinner bezel around the screen than the renderings shown here. What the iPad Mini actually looks like of course, remains a secret that Apple has yet to spill. Personally, I can't wait to see an iPad Mini released. I can think of no better gift to give this holiday season, depending on the price. How about you? Source: MacRumors 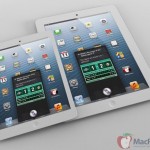 Incredible! New Renderings Show What The iPad Mini Could Look Like
Nothing found :(
Try something else