You are using an outdated browser. Please upgrade your browser to improve your experience.
by Brent Dirks
September 3, 2012
While mockups of the next-generation iPhone have been all the rage recently, the possible iPad mini got its chance to shine in photos published by Apple.pro over the weekend. The most surprising difference in the mockup, sourced from an online commerce website, seems to be the significantly thinner bezel around the screen. Even though news leaked in August that the smaller iPad might look more like an iPod touch, it is a little jarring to see the change. Along with a cellular data antenna, the mockup seems to be very thin and features a smaller dock connector just like the next-generation iPhone. The unit also seems to have larger speakers near the dock. The iPad mini was at first rumored to be introduced at the same Sept. 12 event as the new iPhone. But information last week said that the tablet will now be unveiled in a separate event in October and be put on sale in time for the holiday season. And Instapaper developer Marco Arment apparently stumbled onto a few clues about the existence of the iPad mini. In the access logs of his app, he found references to two new device models – iPad 2,5 and iPad 2,6. This lines up with speculation that the iPad mini would effectively be an iPad 2 with a smaller 7.85-inch screen. Source: Apple.Pro Via: 9to5Mac 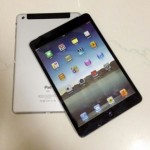